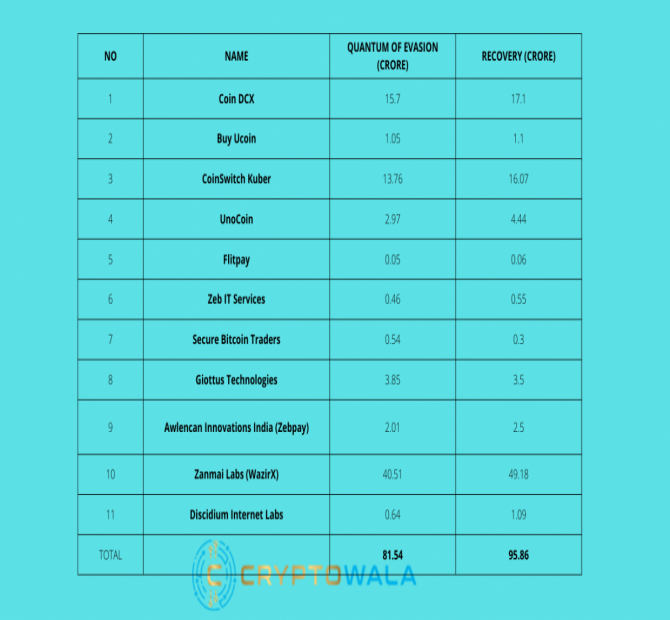 The central government has recovered a total of ₹95.86 crores, including interest and penalty, from 11 crypto exchanges for evading Goods and Services Tax (GST), Pankaj Chaudhary, minister of state for finance, informed the Parliament in a written response to a question. The entities include CoinDCX, Zebpay, WazirX, Unocoin, Flitpay, etc. The highest recovery is from WazirX at INR 49.18 crores.

On whether the government has any data regarding the number of cryptocurrency exchanges in the country, Chaudhary said the Centre does not collect such data. The government proposed to tax crypto gains in the Finance Bill, 2022 but there is still a lack of clarity on various aspects, experts said. It said no deduction of any expenditure or allowance will be allowed while computing such income, except the cost of acquisition. It also proposed that a loss from the transfer of VDAs cannot be set off against any other income.

On March 21 in response to a query in the Parliament, the government clarified that losses from the transfer of virtual digital assets cannot be set off against gains from another. Neither can mining costs be treated as acquisition costs for a tax deduction.

Last week, the government proposed amendments to the Finance Bill, 2022 to disallow the set-off of losses from gains in virtual digital assets. Separately, the government is working on legislation to regulate cryptocurrencies, but no draft has yet been released to the public.